A fish hatchery, in the simplest of terms, is a facility in which fish are raised. It provides a safe haven for artificial breeding, hatching and rearing fish through their early life stages. By maintaining proper water temperature and oxygen levels, and providing adequate food supplies and safety from predators, a hatchery provides an optimum environment for fish eggs to develop and hatch.

Certain types of fish, such as trout and salmon, are favorites among those who love to fish. Sometimes, in a popular fishing hole, the fish are harvested too quickly to allow them to breed and grow. Or, in other cases, the waterway may have become too unhealthy for fish to survive. One purpose of a fish hatchery is to raise a certain kind of fish in order to stock a lake or pond for fishing.

The Abegweit Biodiversity Enhancement Hatchery, operating under the Abegweit First Nation Fisheries and Natural Resources program, prides itself on replenishing, rather than depleting, Island fish stocks. Essentially, the hatchery takes a few fish – brood stock – out of rivers and puts thousands of fish back in, thereby enhancing the province’s fish supply.

The hatchery process in no way impedes the life cycle of the fish, but instead it increases the chances of survival by facilitating the fertilization and hatching of eggs in a protected environment, keeping the fish in a controlled environment until they reach the stage in which they swim up to the surface of the water in search of food. These “swim up fry” or “fingerlings” are then released into the river from which their parents were taken. Releasing fish back into the same waterway helps preserve the DNA makeup of the river or stream and maintain the genetic integrity of the fish.

A large portion of the brook trout raised at the hatchery is used to satisfy contracts with the Wildlife Federation and the province. Each year, brood stock is taken from four rivers, with some 10,000 fingerlings released back into each waterway. An additional 4,000 trout are used to supply fishing derbies, as allocated by the provincial government. Surplus fish are sold to private pond owners.

As with the brook trout, the provincial government and the Wildlife Federation determine where Atlantic salmon stock is released. Currently, Atlantic salmon brood stock is taken from the Morell River, with approximately 50,000 fingerlings being released back into that body of water. 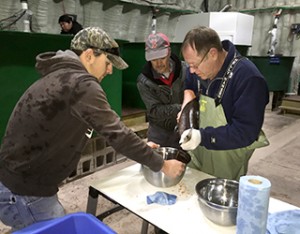 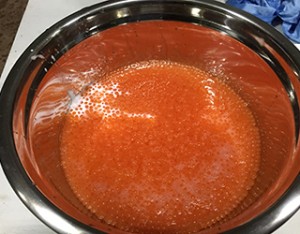 Vision Our Vision is to enhance the river systems on Prince Edward Island through community partnerships, education, innovation and cultural awareness to maintain environmental … END_OF_DOCUMENT_TOKEN_TO_BE_REPLACED